The ContiTrailAttack 3, the youngest of the Korbach Third Generation has achieved the Top Rung in the class of super Enduro Tires just six months after its launch. The six-way comparison test in issue 13/2019 of the magazine MOTORRAD resulted in the newcomer achieving the highest score in most individual disciplines and in the overall ranking.

In the comparative test, the testers had six of the latest BMW R 1250 GS with tires in the dimensions 120/70 R19 front and 170/60 R17 rear, mounted. Among the test criteria in the roadbook were handling, country roads, everyday life and wear. Ultimately the ContiTrailAttack 3 achieved the most impressive marks.

“Handling on country roads has a name, and that is Conti!”, The testers enthused. As the class leader, the ContiTrailAttack 3 also took first place in the overall standings. 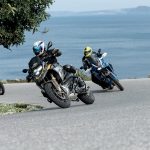 Continental launches the ContiTrailAttack 3 in Greece

The testers concluded: “’Curve junkies’ can rely on the Trail Attack 3, which stands clearly above its predecessor with a visible boost in development, but additionally, everyday use and wear was visibly better than the competition.”

With this amazing performance, the ContiTrailAttack 3 continues the success of the “Third Generation Series” from Continental. For example, the ContiSportAttack 3 sprinted to first place in the FASTBIKE 2/2016 and confidently scored the maximum points in the five-way comparison test in the MOTORRAD MAGAZINE 6/2017 in Austria. The ContiRoadAttack 3 was a convincing test winner in the PS 9/2017 and in the MOTORCYCLE 12/2017. 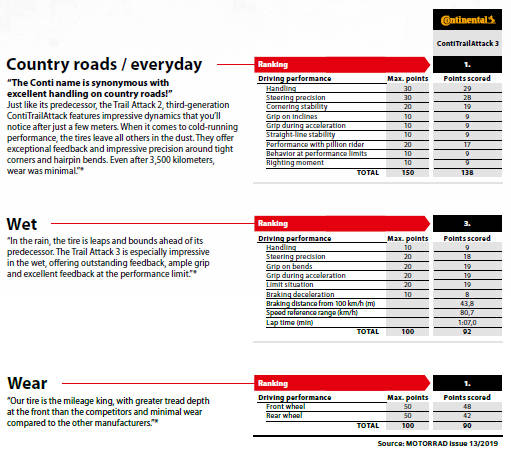 Why is it important to consider the seat height? If you are familiar with tests or information about motorcycles and scooters, you will have read about seat height. It is usually measured in inches, and it is an important factor when choosing your next motorcycle or scooter. Some may think that a few millimeters won’t […]

Long life for your Continental: performance and durability is possible

Performance of Continental Tires The life span of a motorcycle tire is hard to predict due to the many variables is roads, riding style, motorcycle specifications, etc. Some tires might offer an excellent tread life, but their overall performance diminishes considerably after a few thousand miles. Continental works hard to ensure that their tires provide […]

Continental, a point of reference in the development of GRIP technology

Taking care of the safety of our riders Tire grip is crucial for safer riding. Tires are the only contact a bike makes with the road. Furthermore, they are the primary component that hold us upright when riding: so we have to pay a lot of attention to their condition and performance . For over […]